Tick borne diseases in dogs are infections passed from ticks to mammals. In most cases, the disease is passed when a tick feeds on an animal infected with bacteria. Most dog tick diseases occur in areas where it is very humid, and ticks thrive, for example, around lakes and forests and weeds. If your canine spends time outside, you may be at risk of contracting a tick-borne disease.

Research on tick borne disease in dogs in the USA has shown that positive tests for Lyme disease were 11.6% in the Northeast, 4% in the Midwest, and 1.4% in the West. Another study on tick infested dogs showed that 18.4% were exposed to B. burgdorferi, the bacteria responsible for transmitting Lyme disease.

Pets that spend more time outdoors may be more susceptible to contracting tick-borne diseases than pets that don’t spend much time roaming freely outdoors. It is because ticks thrive in such environments and commonly feed on animals there, allowing them to pass these diseases onto their mammalian host.

Tick bites on dog infestations are prevalent in dogs as they can be very pesky, and with the proper treatment, prevention and vigilance, your pet can remain parasite-free. However, these conditions can spread rapidly if left untreated, resulting in serious health issues and even death.

Therefore, it’s essential to know the signs of a tick bite and follow it up with a thorough check of your dog under the supervision of a professional veterinarian. In this article, we have covered everything you ever wanted to know about tick diseases in dogs and how you can keep him safe from them:

What are Tick Borne Diseases in Dogs?

Numerous tick-borne diseases can affect dogs, including Lyme disease, ehrlichiosis, anaplasmosis, etc. Owners should keep themselves well aware of the risks associated with getting ticks on their dogs and ensure that the ticks are removed safely.

Fleas and ticks are prevalent and commonly found in dogs. In fact, you are more likely to get dog fleas or ticks than you are to get them from your cats. Fleas can cause severe itching and inflammation in your dog’s skin and may transmit diseases to your dog. Ticks can transmit pathogens that cause infections that can be life-threatening in dogs. Dogs’ most common tick-borne diseases include Babesiosis, and Rocky Mountain Spotted Fever.

What Are The Common Tick Diseases?

Following are the common tick diseases in dogs. We also have covered the tick borne disease symptoms in dogs here. Let’s take a look:

Lyme disease is a common tick-borne illness affecting dogs and humans. The ailments are caused by the parasite Borrelia burgdorferi bacteria that is spread by the deer tick and the western black-legged tick.

Lyme disease in humans has common symptoms including fever, headache, fatigue, sensitivity to light, numbness or tingling, sore or stiff neck, and a skin rash called erythema migrans. When the ailment is untreated, the infection can spread to joints, the heart, and the nervous system. In most severe cases in humans, symptoms such as an irregular heartbeat and inflammation of the brain and spinal cord is seen.

Rocky Mountain spotted fever is a disease affecting dogs’ nervous and blood systems. Symptoms include lethargy and disorientation, followed by difficulty walking and staggering gait. Numbness can also develop in the hind limbs and paresis of the tongue. Rickettsia rickettsia bacteria is responsible for the disease that is transmitted by infected American dog tick and the lone star tick.

Ehrlichiosis is another tick-borne illness that affects dogs primarily in the heart and central nervous system. Symptoms include lethargy, intermittent eye discharge, nasal discharge, and weakness of the rear limbs. Ehrlichia ewingii and Ehrlichia chaffeensis, the ailment-causing bacteria, are transmitted by the lone star tick in the southwestern as well as Gulf Coast regions of the United States. Higher cases of infections are reported.

Anaplasmosis is a rare disease that affects dogs primarily caused by the parasite. Anaplasma phagocytophilum and Anaplasma platys. The sign of the disease is usually nonspecific; however, you may witness signs such as Loss of appetite, LethargyLameness, Neck pain or neurologic signs in some cases, Bruising on the gums, and bellySpontaneous nosebleeds, etc. Anaplasma phagocytophilum is transmitted by the infected deer tick and the western black-legged tick.

There is also another common tick-borne disease Babesiosis. Babesiosis is caused by the bacteria Babesia gibsoni and Babesia vogeli, and the symptoms include Lack of activity/lethargy, weakness, Weight loss, etc.

Hepatozoonosis is primarily seen in the eastern and middle-southern regions of the United States. The parasite species Hepatozoon americanum causes the ailments. It is spreaded by the Gulf Coast tick. Also, brown dog tick spreads Hepatozoon canis.

Causes of Tick Infestations in Dogs

There are a number of possible causes of tick infestations in dogs. They are most likely to occur in dogs that live in wooded or grassy areas and that spend a lot of time outdoors.

To bring more transparency and clarity to tick-borne illness in dogs, we have graphically prepared the tick’s lifecycle with reference to Lyme Disease in an infographic below:

Signs of Tick Infestations in Dogs

Your dog may also have red, itchy bumps on the skin, which are called tick bites. If your dog has fleas and ticks, he may also have a fever, an increase in thirst, increased urination, vomiting,lethargy, and depression.

If you live in an area where it’s common to find ticks on dogs, you should regularly check your dog for ticks and remove them as soon as you find them.You can remove the tick using fine-tipped tweezers.

If a dog is infected with a tick-borne disease, the first step is to have the pet examined by a veterinarian. The veterinarian will use blood tests to determine if the pet has symptoms of the disease. If the pet does not have symptoms of the disease, it will be treated and tips will be given to provent the illness. The treatment for tick bite borne diseases in dogs includes antibiotics, corticosteroids and anti-inflammatory drugs.

Conclusion: How to Prevent Tick Borne Diseases in Dog

These include: closely cropped grass and tall weeds, areas around rocks and logs, which are often home to small animals such as mice and chipmunks, and dense brush. Also avoid where ticks are most common, including grassy or wooded areas near bodies of water; under bushes and rocks; along trails; and in tall grass or weeds near the middle of the lawn or in the mulch under shrubs or trees.

Keep your dog’s body and haircoat well groomed and cleaned regularly. This will help reduce the number of ticks that pick up a host and wait for a blood meal. Check your dog regularly for ticks during periods of highest tick activity (e.g., spring through fall).

Disclaimer: The content on the site is for educational purposes only, and it does not provide medical advice. The shared information must not be treated as a substitute for or alternative for medical practitioner advice, diagnosis, or treatment. Regarding any concerns about your pet’s health, seeking veterinary guidance is of utmost necessity. Each pet has specific health, fitness & nutrition needs. Do not disregard, avoid or delay pet health-related advice from veterinarians based on reading the information provided on this site.

A dog can be infected with a tick-borne disease but never show signs of illness or disease. Signs and symptoms of tick-borne diseases in dogs typically develop between one and six weeks after exposure to the bites or nymphs of the ticks that transmit them. Some signs and symptoms may appear quickly (within one to two days) and others may take longer to develop, but all can occur within weeks of exposure to the bacteria or viruses causing the disease.

Long term effects of tick borne disease can be fatal. It  can cause  kidney failure, which may be fatal, as well as serious cardiac and neurological effects.

Pancreatitis is among the most common diseases seen in dogs. It occurs when your dog’s pancreas becomes inflamed. This can cause a variety of symptoms, from mild to severe (even fatal). It is crucial to be aware of what signs indicate that pancreatitis may be present in your dog.  Pancreatitis can affect dogs of all […] 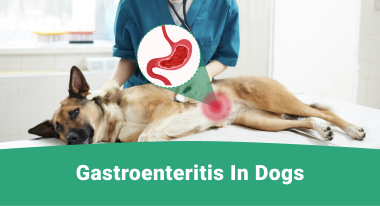 Gastroenteritis is an umbrella term used to describe digestive system distress and inflammation of the GI tract. Several etiologies can cause Gastroenteritis in dogs, but the most common are bacteria, viruses, and parasites. Although the exact cause of your dog’s gastritis will vary from case to case, it’s essential to recognize the symptoms and to […] 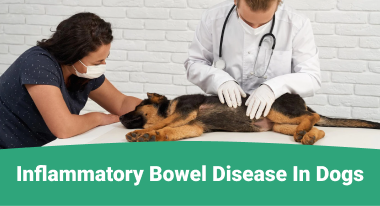 Inflammatory Bowel Disease is a condition affecting dogs of all ages. The exact cause of this disease is unknown, but many factors are known to increase your dog’s risk of developing IBD. These factors include age, hereditary predisposition, gut bacteria changes, diet changes, stress, and environmental triggers. Symptoms of the ailment may vary from dog […]